‘BATTLE OF THE SEXES’ IN DUBAI CINEMAS THIS DECEMBER

DIFF’s innovative cinema showcase, [email protected] Cinemas powered by Du, welcomes the finest cinema from around the world for a 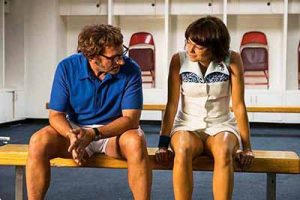 year-round festival like no other. From 7-14 December fans can catch a very special screening of ‘Battle of the Sexes’, starring Steve Carrell, Emma Stone, Elisabeth Shue and Andrea Riseborough.

The blockbuster hit serves up a gripping dramatization of the build-up to the infamous tennis match between Billie Jean King and Bobby Riggs in 1973. A titanic struggle between a woman battling for equality and her identity in the male-dominated world of sports, and man battling his inner demons and addictions – this pivotal moment in athletics history comes to life, in a heart-warming and inspirational feel good movie.

Having premiered at Telluride Film Festival, ‘Battle of the Sexes’ received critical acclaim for the performances of Steve Carrell as Riggs, and Emma Stone as King, with Stone’s performance praised as potentially the best of her career. Directed by the wedded team of American film 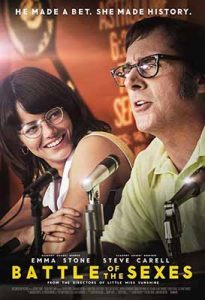 makers Jonathan Dayton and Valerie Faris, ‘Battle of the Sexes’ is their third joint directorial-venture to date, having previously wor

ked on features such as the two-time Oscar-winning classic ‘Little Miss Sunshine’ (2006).

This extraordinary tale of sporting wonderment will have films fans in awe of the rambunctious Bobby Riggs, and the delightful, personable Billie Jean King – with supporting roles from Austin Stowell (Bridge of Spies, 2015; and Whiplash, 2014), and Sarah Silverman (Wreck It Ralph, 2012) – at the 14th Edition of DIFF in 2017.